You may have heard of PirateBox, a free and open source software system (with some recommended hardware platforms) for creating what is essentially a wireless dead drop. I like the idea behind PirateBox because it's a project that sits at the intersection of cool technology, statement on digital rights, and art.

So realizing I had some spare things lying around I decided to make one.

Important note before we continue: PirateBox has downloadable distributions for various routers and Raspberry Pis that are basically turnkey and should Just Work. In this blog post we explicitly don't use these because I wanted to do everything myself, including most of the software and configuration.

Why are we doing this?

I first spotted a PirateBox in the wild at a conference a few months ago, and I was inspired to do it myself. I did this because it was interesting to me on a technical level (and also on an artistic level, though I haven't done a lot to e.g. make my box look more visually pirate - ideas welcome!).

I also did this specifically to take it to DEFCON. Unfortunately, nothing too exciting happened over there. A few people posted in the chat over the 4 days but in this design chat is not persistent across reboots (this may be something I decide to change). Some relatively uninteresting stuff was uploaded. By design, the PirateBox doesn't track users at all but I hope I got to share some files with people, which is the main point of doing this.

Now let's talk about how, particularly for people like me who want to roll everything themselves. 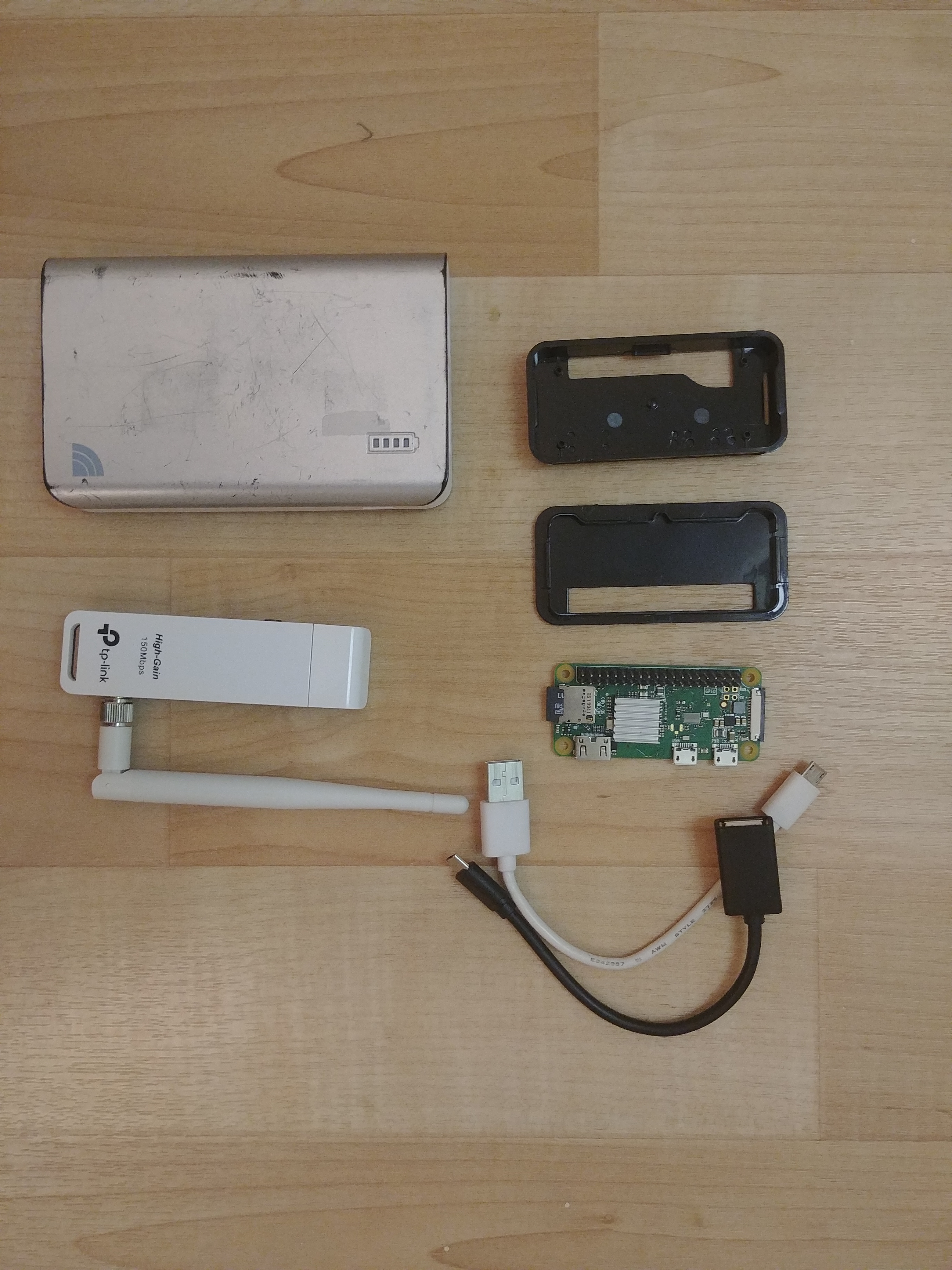 Though it's unrelated to the purpose of this project in particular, I wanted another TL-WN22N v1 (the kind with the useful AR9271 chipset). It happens to be a good general purpose wireless adapter in any case. Unfortunately they're a little hard to find these days, so I played the Amazon hardware revision lottery on a listing that didn't say which revision it was explicitly, and lost, ending up with a v2. Oh well.

The important thing to know is v2 is based on the garbage RTL8188 chipset, and we'll need to compile drivers to get it to play nice with wpa_supplicant later.

There is an official PirateBox distribution for Raspberry Pis. However I ended up being unhappy with the official release for a couple of reasons so I decided to rewrite most of the backend and roll my own distribution of the system. I like doing things myself instead of going with the premade solution sometimes.

The code can be found here: https://git.lain.faith/haskal/piratebox-web/

I kept most of the frontend, and it visually looks the same as the official PirateBox release, but the backend is now consolidated into a single (simpler) python script running a webserver based on aiohttp. I also removed the forum feature (I didn't feel like porting it) and added support for unlocking ext4 file based encryption via the web UI, since I wanted my PirateBox to have files and file names encrypted at rest.

I'm too cool for Raspbian so we're using Arch Linux Arm. You may have noticed the repo contains arch packaging, because I like properly installing things instead of polluting the root filesystem with stuff that isn't tracked by the package manager.

Get the latest release of Arch Linux Arm for ARMv6 Raspberry Pi. Use cfdisk/parted/gparted/whatever to partition your SD card into:

Now it's time for black magic. If you're on an arch host install qemu-arm-static, then simply arch-chroot into the setup:

I also needed a tweak to systemd-resolved using my (currently non-DNSSEC) resolvers. Edit /etc/systemd/resolved.conf and add

Next, edit fstab. Here's mine. Note the tmpfs entries at the end, those are for when we eventually turn the root partition read-only.

Aside: Developing directly on the Pi Zero

If you want to continue directly on your Pi Zero, you can configure it with the gadget ethernet driver and plug it directly into your PC.

Add the following to /boot/config.txt

and append to the command line in /boot/cmdline.txt

Now, eject your SD card, stick it in your Pi Zero, and plug it into your computer. Set up connection sharing (eg with NetworkManager) and the pi should automatically connect to you.

Alternatively, you can also continue setting up the image inside the qemu chroot on your host.

Compiling drivers, or, Realtek Why Are You Like This

So I needed capabilities to create a wifi AP off of an RTL8188-based adapter. Unfortunately as I learned the hard way, the default r8188eu driver really sucks and doesn't let us do anything. Fortunately, there's a better driver available.

Edit the Makefile. Change the following.

Then build and install (using the instructions from the readme)

Disabling builtin wifi, and other things

Disable builtin wifi by blacklisting the kernel modules for it.

Other power saving measures, stolen from the internet:

and of course systemctl enable conserve-power.service

Now we can configure the wireless hotspot and captive-portal-like redirection for convenience on mobile clients.

And iptables too, for good measure

You may have noticed a port 443 in the iptables rules. Now since this is a private offline network with a server hosted at piratebox.lan, we obviously can't get real SSL certs, but I was worried that entering the file based encryption password over plain HTTP over an obviously open network could potentially be sniffed, so I created a new CA and cert for piratebox.lan and had my devices trust my CA. I won't go into how to do this here, there are probably plenty of guides online (see the openssl command and easy-rsa).

One of the significant parts of the nginx config for this is the captive portal stuff. It's very basic, and I haven't actually tested the Microsoft one. This config ensures that when mobile devices connect to the PirateBox network, our homepage pops up.

I experimented with faking an actual 204 response for /generate_204 to trick Android into thinking it's connected to the internet, because it turns out that from the captive portal login screen (at least on my phone) I cannot actually upload files. I couldn't get it to work, so unfortunately with this setup on Android you have to tap the "Use this network as-is" option and then open http://piratebox.lan in a real browser.

Set up the storage partition and configure file based encryption.

Switch to read only

We want the PirateBox to be resilient against power failure and such. It's on a battery pack after all. So to ensure system integrity, we can set the rootfs to be read-only. The fstab is already set up with tmpfs mounts for everything this system should want to write to. The storage partition needs to be read-write for obvious reasons (it's the whole point of the PirateBox!) so I included some mount options in the fstab that might help with keeping that consistent and hopefully avoiding the need for manual fscks in the event of a power loss that interrupts a write.

To change the rootfs to read only, open /boot/cmdline.txt. Change rw to ro. That's it! Now you're free to just unplug the thing without fear of system corruption.

Do you have the time?

There is a small issue that on reboots the Pi loses system time. And since we're not on the internet, there are no NTP servers to sync with. Other PirateBox users have solved this issue by attaching a battery-backed RTC to their Pis. Alternatively, you can use the haskal Inaccurate Network Time Protocol like this

Wow it's a PirateBox! 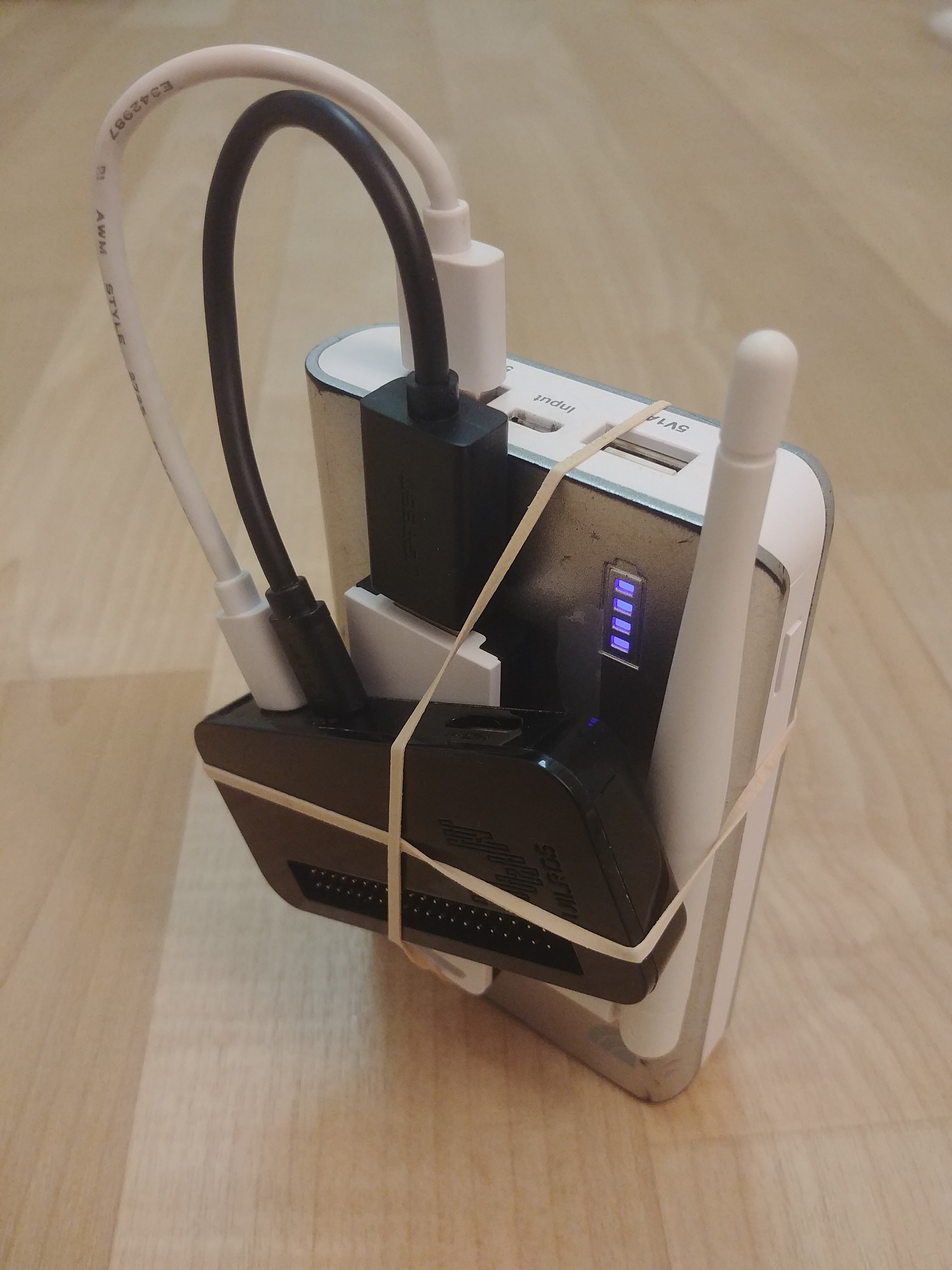 Here's the web UI. To get to it, connect to the PirateBox's wifi network (PirateBox - Share Freely) and open http://piratebox.lan 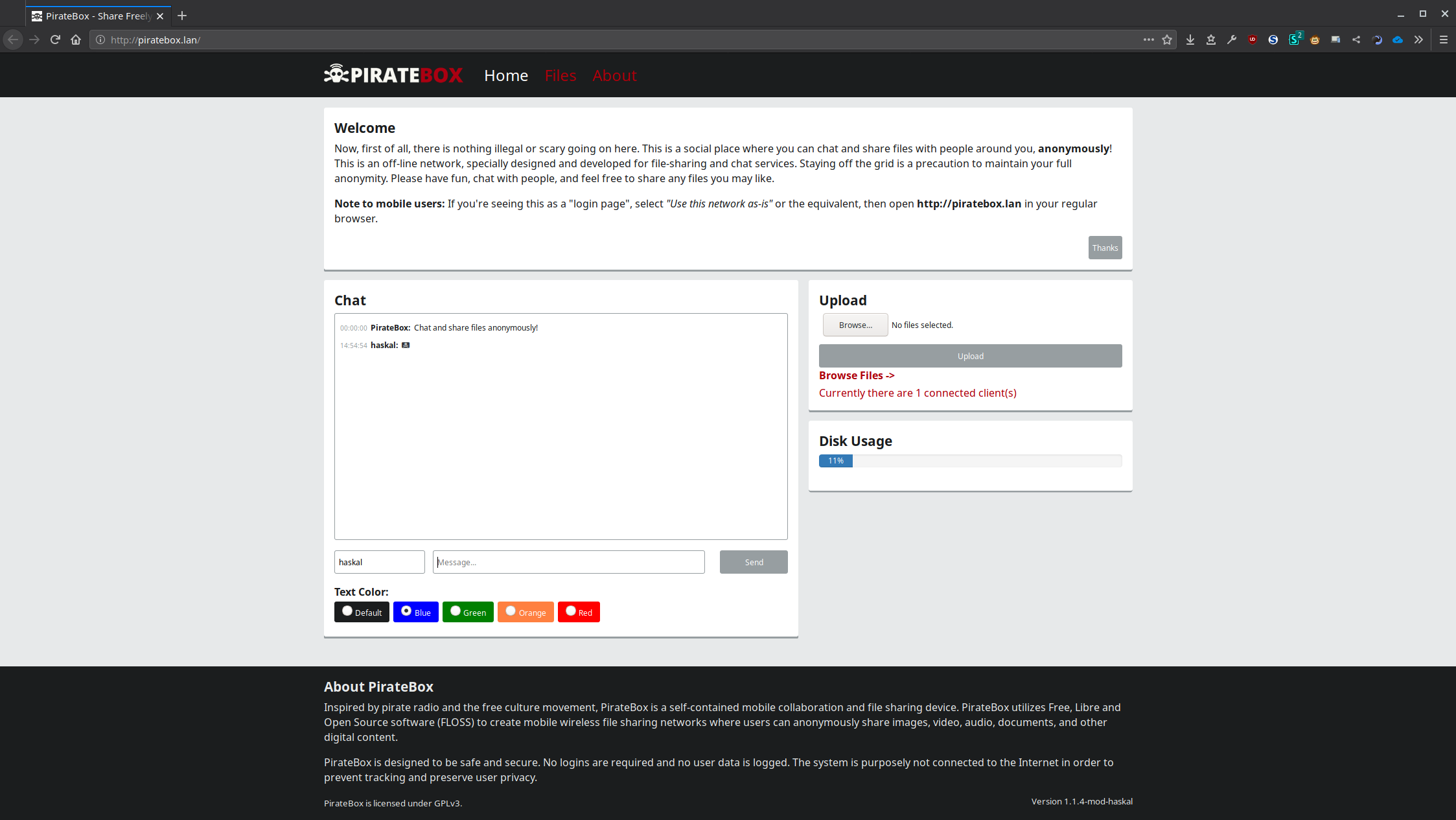 Whenever you boot up your PirateBox if you've configured encryption, you'll need to unlock the file share directory. Open http://piratebox.lan/piratebox/admin/unlock and enter the encryption password. Now, your files should be available.

If you're looking for some starter files to put on your PirateBox, consider the Buffalo Mesh Net Library or appropriate music from Dubioza Kolektiv.